Contact Us Today for Guidance on Your MBA, Med / Graduate School or College Application
Schedule Your Free Profile Review

December means the year 2022 is coming to a close!  Congrats to applicants who have received admission after the long march through Round 1 applications.

For applicants in the midst of Round 2 applications, a reminder that year-end is only a few weeks away and several Round 2 deadlines are approaching in the first week of January.  Reach out to Admitify ASAP for expert guidance on your Round 2 applications!

Today we are featuring the QS Global MBA Rankings, which were released a little over a month ago.  QS ranks the MBA programs based on a weighted scoring system across five categories: Employability – 40%, Entrepreneurship and Alumni Outcomes – 15%, Return on Investment – 20%, Thought Leadership – 15%, Class & Faculty Diversity – 10%.

For the third year in a row, Stanford GSB took the #1 global ranking.  Schools in the United States received 5 of the top 10 rankings, with Harvard and Wharton in the #2 and #3 spots, respectively.  The highest-ranking European school was HEC Paris and the only non-US, semi-non-European school ranked in the top 10 was INSEAD, which has campuses in Singapore and UAE in addition to its main campus outside Paris.  The 2023 rankings of the top 10 schools were essentially unchanged from last year’s QS rankings.  Overall, QS ranked 300 MBA programs representing 47 countries.  For the full list of QS MBA rankings, click here. 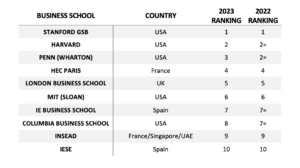 Tymofiy Mylovanov: Leading the Kyiv School of Economics Through Crisis

Which Countries Offer the Cheapest MBAs